I have the great pleasure of sharing my first ever GUEST POST today by the marvellous Johanna from New York, New York (so good they named it twice). She is a person that makes me tingle! Check her out on Twitter: @themanicheans, and on her blog: http://themanicheans.blogspot.com/ Many thanks to her! Read, enjoy and think! As ever all comments a welcomed…

I’ve just awoken from a nap, and I’m writing while listening to Open Arms by Journey.
A few nights ago, I was victim of the most horrifying nightmare. I attended a friends’ dinner party that turned to hell.

One of my friends who lives with her boyfriend decided to organize a dinner by cooking for us at her small apartment. I wasn’t too excited about it because I wanted to write, but a little voice told me to go since I couldn’t stay home writing all the time, and that I needed social contact too.
Therefore I went. And I really tried to enjoy it, but I couldn’t.

The conversation bizarrely revolved around topics I was either not familiar with, or not interested in. These topics included: the latest concerts and shows in town, obscure European brands I’ve never seen in Europe, manicures, wedding cakes, Halloween, a fish, and cigarette smoke. I guess.

I can’t exactly remember everything. I felt a bit lost, to say the least.

I tried to save myself by wandering in my fantasy world and put some sense into this mess, but instead, I imagined that my friends’ mouths became like clay and lost their shape under the constant pressure of my fingers on their features. After releasing all my frustration, their heads didn’t look like they used to. I faced empty eye sockets and gapping throats from where more unintelligible words kept pouring. I covered my ears to protect myself and I sought to run away, yet I remained stuck in place. They never shut up, almost deafening me with the crap they seemed so obsessed to chat about. I defended myself the best I could, but I miserably failed.
I had to listen to them.

Reading American Psycho before bed is maybe not the best way not to feel extreme criminal urges while having to stand worthless conversations like that. Thank goodness, I didn’t take pleasure at picturing my friends’ heads on sticks…

More words passed through me like hollow projectiles, exploding upon impact against my chest, leaving me disoriented and dizzy. I could hear them fade in the background: “5th avenue”, “latest boutique on the West Side”, “$300 haircuts at Bergdorf’s”, “swimming”, “Moby”, “church on the Lower East Side”, “prosciutto”, “sausage”, “sale”?

In return my brain reacted strangely, throwing some absurdities that nobody noticed. Slaying my noisy neighbors with a kitchen knife (American Psycho’s influence here again), doing intergalactic drugs at the back of a limo for Halloween (because I had bought the Star Trek costume that same day), and joking about my friend’s Eurotrash boyfriend’s sexual orientation since he: 1) adopted a pet and named the male fish “Fishionista” (so that’s where the fish came from); 2) when I asked whether the fish was gay, he responded yes, and then he added – he’s a European gay fish; 3) the boyfriend himself is European; 4) when I asked whether this meant that he considered himself a gay fish, he didn’t get it and changed subjects; 5) finally, he continuously walked among us – six of us including another guy – with an apron but no pants on…
I splashed cold water on my face and stared in the mirror for one long minute. The dinner party I was supposed to attend never actually happened, right?
After reassuring myself I hadn’t completely lost my mind, I still checked my calendar in a last moment of doubt…

There had been a dinner party scheduled on the same day I had this awful nightmare. I couldn’t swallow. My mouth felt utterly dry. I needed to drink something. Orange juice perhaps. I was hungry too.

I fixed myself a snack, and distracted my rushing thoughts by playing with my cats. Then, I looked at my calendar again. I didn’t misread the date.

Did everything I dreamt actually take place?

I went back in time, refreshing my recollection of the events by watching some catty reality television show, because I somehow trusted these things helped trigger repressed memories of traumatic episodes such as the one I was desperately attempting to remember… You know “superficiality always attracts emptiness” type of thing.

And like every catharsis, this one gave me the sad feeling I had indeed wasted 3 precious hours of my life that evening. I asked myself: was it really the price to pay for the sake of bowing to societal pressures? Mostly, I painfully became aware of one key element that caused me such discomfort.

Did I lose grip with the real world?

Writing and reading too much automatically pulled me from everything that wasn’t writing or reading. Everything else sounded rapidly so abstract and remote, I showed no pleasure in talking or even thinking about it. Why bother? As long as it didn’t deal with my WIP, my blog, or Twitter, I didn’t care anymore. Nothing could make me happier than the virtual world I created. No shoes, bags, haircuts, nice dresses and free champagne… I had become insensitive to them.
I looked at the people who I considered my close friends and I paused.

Was I meant to continue the journey without them? I knew I started to detach myself more and more because of my writing aspirations. It felt like I grasped everything with a pair of new eyes, and they all stayed hidden in the dark. None of them ever really read what I wrote either. I don’t know what they thought of my dream. Maybe they saw ME as the crazy one.

I searched for an easy answer, and tried to convince myself they were the folks I wanted to share my time with. Then, I suddenly recalled something.

When questioning whether New York City was still the place for me to be in, I uttered the idea of moving somewhere else, why not California? One of the girls immediately responded: “You want to be with fake people?”

I’m not sure if that was a rhetorical question…
You know what?

Yes! I want to remove myself from the fake. Maybe I’m an idealist and haven’t realized wherever I’ll go, I’ll always be surrounded by it, but I’ll give it a shot.

I didn’t lose grip with reality.

Being a writer pushed me to another dimension from where I experienced things differently. It didn’t make me better or worse! So what if all I thought of was how much I missed my computer and my books? You can’t ignore me and toss me to a corner because you don’t understand.
Have you ever recognized settling for the wrong kind of people led to the loss of your identity anyway? Well, that’s exactly how I felt.

Yes: I’m the chick who writes. Yes: I’m the chick with crazy dreams. Yes: I enjoy my virtual world. I have tons of tweeps who I care for, and fans and good people who love to read what I put on paper. Every day I wake up and I think of them. They’re the ones who keep me going, who encourage me and support my ambition. And no: this isn’t a whim. I plan to write for the rest of my life.

I lost grip with the empty world a long time ago.

There never was a moment where I felt connected to superficiality. Every time I encountered it, I walked around it and I kept moving forward. The further I went, the more I saw people’s true colors. Yes, I got disappointed. Yes, I also became more lonely and secluded. Isn’t it what life is ultimately all about? Endlessly wandering the earth in search of kindred spirits?
I started my own quest.

A last thought hit me. This never was about LOSING grip. It always was about FINDING it. 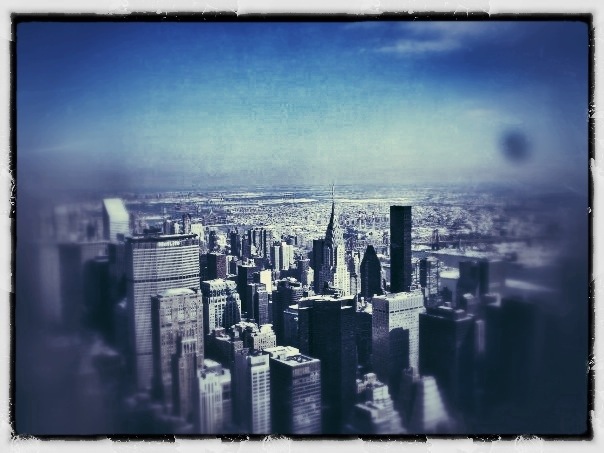