And extract from my current work in progress entitled ‘Five Siamese Histories’:

He lifts his rifle above his head to prevent it getting damp, as best he can, but this is a futile gesture as the snow is falling in heaving clumps that weigh ponderously upon any surface touched. The weight of it almost pushing his flagging body down as he stumbles through each drift and hummock of snow. It feels like lifting icy stones; icy stones that are his unfeeling feet inside his boots. Lead legs lifting like slow pistons. Will the blackness of frostbite come? Perhaps it has already. At least he has a greatcoat, unlike some of his lost companions; a greatcoat he stole from a frozen-eyed German corpse. This is a risk he knows, he has heard that this part of forest is full of Americans, waiting for some kind of push. From a distance they might recognise the grey shade of his coat to be hostile. He has calculated the risk to be worth it. For now.

Death by a bullet versus death by creeping frost?

Exactly why he has ended up here in amongst the trees he has no clue and he is even uncertain as to the direction he should travel, but then again trees are the best shelter he can find, for now. Cover from the wind, cover from the machine guns that secret themselves as they must on high ground. High ground along the ridge beyond the forest, back behind him. American guns or German guns? He knows not.

Elias has patted his pockets for his compass several times, each time forgetting it was left in his kitbag. His kitbag that was left behind as he ran headlong from the mortars that peppered his unit’s particular line of fox holes with plump detonations that mixed snow and dirt in the air like a crazed succession of giant snow globes exploding. The compass would have helped and in this dark clouded weather he cannot discern where the sun is. Perhaps the frontline is East from here?

All he knows is that he is lost, and has been for two days. Two days of cold and hunger.

Leans against a pine. Trying to catch his breath, but it escapes in short bursts of misty cloud as he wheezes.

Elias wipes snow from the bark in search of north-facing moss, a navigation trick he learnt in training, but this tree is sadly moss free. He removes his helmet, wipes his brow, and rests up against the trunk for a few moments. Slumping down the rough bark. He knows he should not linger, sleep would be a killer, though his bones desire it so.

Time passes into silence and Elias is vaguely aware that he is sat buried in snow, great patterings of it have fallen from the tree, covering much of his body, although it is at least no longer falling from the sky.

More time must have passed.

The voices speak German; a tongue he learnt from Doctor Frewen when he was but a boy, so he understands very well what they are saying and in his frozen mind he can hardly distinguish it from English. ‘English’; the surname of his father. The real father he never knew.

‘We should go back,’ says the first German voice,

‘Back is where the fucking Americans are,’ says the second voice,

Elias pulls his eyes open, ice on his lashes.

They are standing right in front of him, but it appears that he remains unseen. Or perhaps they think him dead? His hand is on his rifle but to pull it forward, lift it and grip the trigger would alert them. Perhaps he could shoot one of them, but would he have time for the second? He flexes his fingers but his knuckles groan with the pain of cold, his hand does not feel like it is his own.

Should he speak? Give himself up?

‘You stupid fucker,’ says the second,

Elia’s eyes have cleared somewhat. The second is an officer; a clean-shaven youth, skull and crossbones insignia, black leather coat.

The first is simply a foot-soldier; infantry, an older man with lines of experience spreading from his eyes. Elias is aware that his own breathing has quickened with fear, and that his breath is producing multiple clouds. Clouds that will give him away. For no particular reason he can think of, apart from the fact he knows he is weak and perhaps dying, he coughs.

The two Germans turn slowly and the foot-soldier raises his machine gun; the officer pulls back his coat to place his hand on his holster. Elias stares at the officer’s boots with envy. Riding boots, nicely polished, wet with snow.

‘Help him,’ orders the officer, pulling out his Luger and pointing it at Elias.

The foot-soldier shoulders his gun and crouches to brush snow from Elias’ body.

‘Identify yourself,’ says the officer,

The foot-soldier chucks Elias’ rifle aside, pulls open his greatcoat and undoes his khaki jacket beneath, ripping his dog tags from his neck. Elias feels the pain of this movement against his skin; proof that he is still living.

‘Kill him,’ says the officer,

Elias can see that the foot-soldier has fear in his eyes now; a fear he has felt himself.

Ordinary men do not kill in cold blood, not without some primal existential fear as a prompt. For ordinary men there is an inbuilt aversion. He can see the signs; signs he learned from the Doctor Frewen. ‘Observation is the key to all human interaction,’ the Doctor used to say. Elias has learnt that the simple quick action of pulling a trigger to blow someone’s head off changes a man. Forever. He can see fear of this impending change in the eyes of this ordinary German. This man has not killed before.

The foot-soldier looks back at the officer.

‘But sir, I do not have much ammunition, better to save it in case we encounter the Americans,’

He steps forward, pointing the pistol in Elias’ face.

He knows his accent is good, but will it be good enough?

‘I don’t believe you. You wear the tags of an Englishman,’ says the officer,

‘I was sent by Oberstleunant Gersdorff, to scout the American positions,’ says Elias,

‘Yes, yes, I speak good English, my orders are to make contact with enemy positions in this forest and gather intelligence on their position, numbers and armament,’

‘I’ve never heard of this “Gersdorff”,’ says the officer, ‘what unit are you attached to?’

The officer waves his gun in Elias’ face as he says this.

‘The Sixth Panzer you say?’ says the officer,

‘The Sixth Panzer Division is nowhere near Bastogne, I know this for a fact. Why would a tank division send a pathetic spy like you? No, you are lying,’

The officer pushes the safety off and presses the cold rim of the barrel hard into Elias’ forehead.

‘What?’ says the Officer. He turns to face Gruber, the gun waves away. Elias rubs the red ring it has left imprinted on his forehead with a freezing finger.

‘He was a scientist in the Great War,’ says Gruber, ‘They say the Führer reads his books,’

‘Oh, is that so?’ says the officer, ‘So now you’re a fucking expert on the Führer’s reading habits?’

Gruber has unshouldered his gun.

‘We should let this man go,’ he says quietly,

In future recollections Elias Lemon would think of these moments but not fully ever know the reasons for his actions. The instinct for survival and the crippling fear of death can make the oddest of bedfellows. Did he see hope in the weary eyes of the foot-soldier?

Elias swings his snow covered leg with all his might, kicking the officer in the calf, through the glossy leather of his riding boot. The officer is unguarded with his back turned and soon unbalanced in the uneven snow. He falls swiftly sideways. His gun hand flails and the Luger goes off. Elias doesn’t see or understand why but the foot-soldier Gruber fires too; a loud echoing rattle of his sub-machine gun that blasts Elias’ ear drums.

A slump of snow that has been waiting patiently in the branches for this moment falls through the echoes of gunfire and covers Elias completely.

He waits with snow in his mouth.

No movement or sound.

Can he feel the weight of the SS officer on his leg?

It is an effort to push himself up, pull his leg from under the body, shake himself free of the snow.

The officer lies partially buried in snow at his feet, blood spreading from his arm and head, into the fibres of his formally pristine uniform and out to stain and melt the snow. Wisps of steam rising from it’s warmth. Elias wonders if he can smell the iron from that blood-steam. A smell like horseshoes fresh from the smithy.

The foot-soldier is laying on his back, but Elias can see he is alive, breath pumping in steamy jets from his nostrils. A quick inspection of his body and then Elias kneels and cradles Gruber’s head on his lap.

‘You’ll be alright,’ says Elias, ‘the bullet hit your shoulder,’ 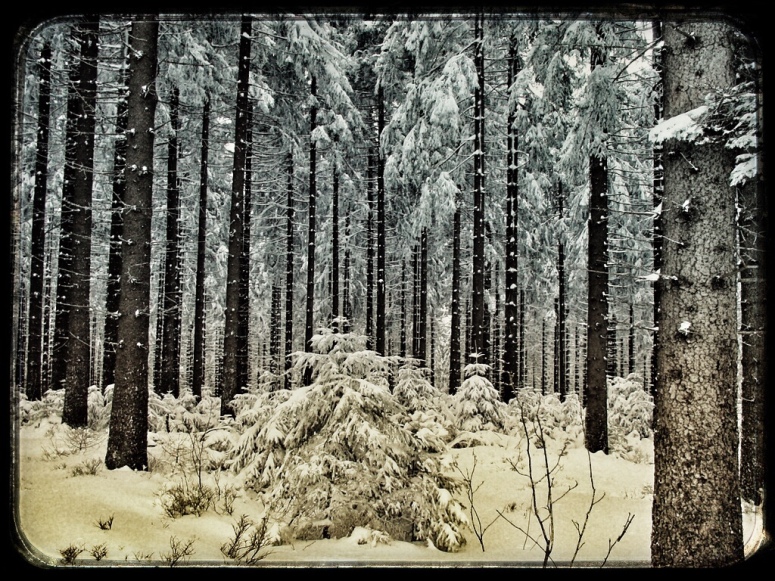